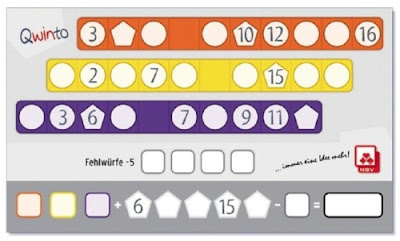 Three years later – the second throw
Exactly three years ago we have published with Qwixx the first game of our new author series – we were looking for card games, and found a game of dice …
Certainly many people have followed attentively the brilliant start with the masterpiece of Steffen Benndorf right into the players hearts. In the meantime more than half a million copies have been sold, numerous foreign-language versions were released and the popularity of this entertaining dice fun is still unbroken.
Prototype „Dice-Lottery“
„Wow, this could be a sensation!“ (Excited editor, Feb. 2012)
One of the most asked questions was right from the start: will it be another game of dice like Qwixx, which means easy rules, without waiting time and in a small box. Our attitude hereto was clear: if the quality is right and if the second throw is as good as the first, if there is much fun and almost everybody can play it – why not? But only then.
Therefore we have sought, tested and refused. And then again sought, tested and refused. And then again sought, tested and ... suddenly stopped ... hey, what’s that?! Three coloured rows, bonus points, no downtime. One player throws the dice and all notes the numbers.
Explained in two minutes. Somehow familiar and yet excitingly different. This could it be! Therefore we have again tested and tested, worked and worked – until it fitted finally!
Prototype „Blagero“
„Hey, this could it be!“ (Surprised editor, Okt. 2014)
Well, here we are: the second game of dice has arrived! It’s penned by the author duo Uwe Rapp and Bernhard Lach, is adapted for 2 – 6 players and the title is: Qwinto
And how does it works? Quite simply!
Every player gets a sheet. The sheet shows three coloured rows (orange, yellow, purple) each with 9 fields. Throughout the course of the game, every player notes numbers in his coloured rows. Therefor only two rules must be respected:
— In each coloured row the numbers must increase from left to right.
— IThere are no duplicate numbers in the vertical 2- or 3-columns allowed.
The players play in clockwise. On your turn (active player), you have to decide, if you want to play with one, two or three dice. Also you can choose the dice colours. You have a maximum of two dice tryings, then you have to tell the diced sum. This sum can be noted from EACH player (also the non-actives!),
but only in rows with the same colours as the used dice. The exactly place of the number within the row can be chosen by each player (as long as he respects the rules mentioned above).
The game is over, once a player has two coloured rows completed with numbers or he has collected his fourth misthrow. A misthrow can always only gets the active player, if he cannot or he doesn’t want to note the sum he threw by himself.
Once a coloured row is completed with numbers, the player gets the number listed on the far right as points. That’s fat. Otherwise every noted number of this row counts only one point. In case of a vertical 3-column (hereof there is a total of 5) is completely filled, the player notes the number in the bonus field as bonus points. Also this is fat. Otherwise a vertical 3-column hast no use. Every misthrow counts 5 minus points.
The winner is the player with the most points.
Maybe you know it already after this short explanation. The clou of this game is, that during the game every player gets exact the same numbers. Well, equal opportunities for all players. However, what each player makes with it is completely different: how to note the numbers best? Small differences can really make big effects. Fortunately after playing some rounds of the game you get a flair for where a number should be noted. During a game you should always look at the sheets of the other players, because every player notes his numbers on his own sheet, but choosing the right dice and dice colour affect the others. And finally counts: Without the right throw at the right time nothing goes on!
Qwinto by Uwe Rapp and
Bernhard Lach
2 – 6 players, 8 years and up
Duration approx. 15 minutes
Illustrations: Oliver Freudenreich 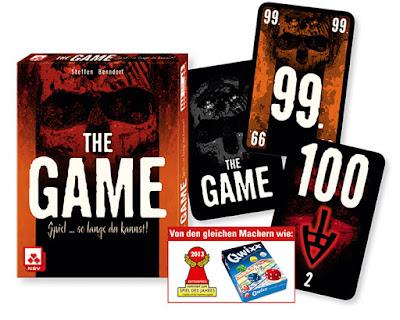 The Game on Fire
In case of a fire, it must be extinguished, but briskly, otherwise everything is flaring completely. Just like this is the Mini-On-Fire-add-on of The Game.
The rules of the captivating basic game remain the same, there’s just one exception.
If someone plays one of the six fire cards (with the numbers 22, 33, 44, 55, 66, 77), not later than the next player has to put one card on it, otherwise the game is over. The pressure on the team is yet bigger, the collective trip yet hotter.
To avoid playing with fire on the table top, you’ll find in the cool metal box the normal set of cards, the fire cards and also a playing support in gloomy design to be rolled out. This game is only available in a small edition, so all fans (and all pyromaniacs) should be very quick and drop in to our stand.
The Game on Fire by Steffen Benndorf 5 players, 8 years and up
Duration approx. 15 minutes
Illustrations: Oliver Freudenreich
Both new games will be available in Essen. Please drop in to our stand: Hall 1 - C131
Do you have more questions? Do you need visual material? Do you want to conduct a secret interview? No problem, please write an e-mail.
presse@nsv.de