From the ashes of a devastating third World War, a precious few Golden Cities emerge offering hope to those who struggle for survival in the wastelands. Players explore the ruins of the modern world completing quests, honing their skills and maneuvering for social status in order to claim a precious spot as a citizen with a Golden City. To enter the Golden city you must:
Become an expert: Reach 20 skill points
Serve the city: Fulfill three secret quests
Become a nobleman: Get the most possible character point 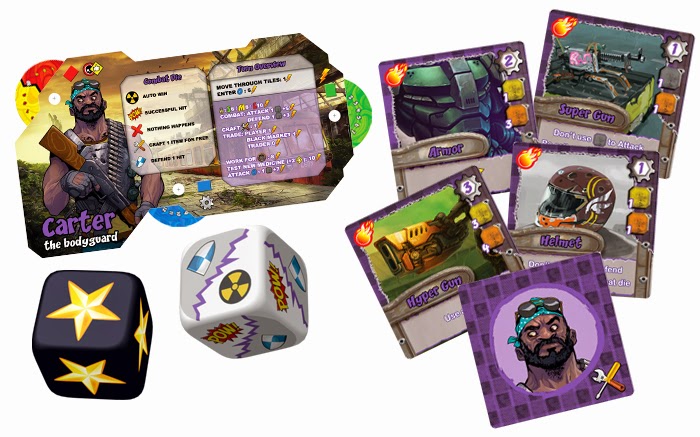 In each turn, the players can spend action points to do several actions such as moving through the city, raiding buildings, attacking other players, and more. Each player has a specific skill — mechanic, trader, electrician, bodyguard and medic — and has his own unique items to build; those items can be traded off against other items or resources.

The board of the game is formed by 9 different tiles. All over the map, the players find different buildings which they can raid. Each time a player raids a building, a raid card of this type of building is taken and read, which leads to specific circumstances taking place. The player will be made to make various decisions including important moral decisions! Upon resolving the various decisions, you will receive character points. The choices you make, for good or for bad, will lead to specific perks and advantages (or disadvantages) during the progress of the game.
Check out Raid & Trade on Kickstarter and be part of this post apocalyptic universe: https://www.kickstarter.com/projects/magecompany/raid-and-trade