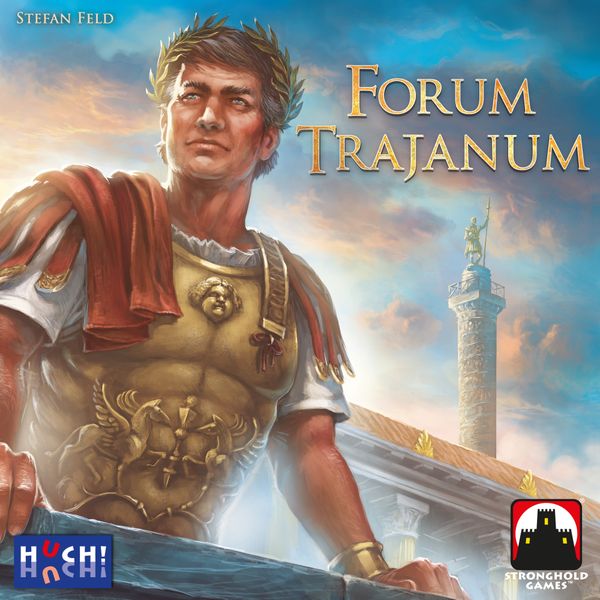 The Forum Trajanum is considered the most beautiful forum of the Roman Empire and also the best preserved. This game takes you back to the most prestigious period of the Roman era, where you are expanding a Colonia, a high-ranking city. You will construct buildings and hire prominent citizens to achieve maximum prestige, and send envoys to the forum to compete for influence. There are many ways to score points, and after 3 cycles, each ending with a scoring phase, a winner will be declared.

The main board contains the forum, where a number of mosaic boards are placed. These will determine how your envoys can be placed during your turn. Around the forum are 3 bonus tracks. These are associated with specific grey building types and each time you construct one your marker will move a spot, giving you access to a new bonus. On the left side of the forum is a building area for the column of Trajanus. Each cycle a new part is added, indicating progress and the number of points for certain achievements. At this side there is also room for three piles of street cards. They will determine from which rows or columns you may pick up tiles, as we will see later on. Next to each street card pile a Trajan card is placed. These cards indicate which special targets will be awarded at the end of the cycle. Finally all other resources (coins, workers and single and double building tiles, colored and grey) are distributed near or on the board.

Your personal Colonia board also requires some setup. You have a street grid of 6x6, with 4 temple areas already present. In the corners you put 4 crane tiles. These allow you to score colored buildings. On each area you now place a Colonia tile face down. At the left is room for 6 rows of 2 citizens, divided over 3 classes. Presence of citizens here affects scoring of grey buildings on horizontal rows, and each citizen class provides an additional bonus as well. Note that you start with one citizen of your choice. At the top of the board is a slide bar, which can move to the right when you activate the corresponding upgrade tile. This slide bar affects scoring your envoys at the forum, as well as your Trajan card achievements. At the bottom of your Colonia board is an area for your starting resources and last but not least a port, where your envoys await passage to the forum. 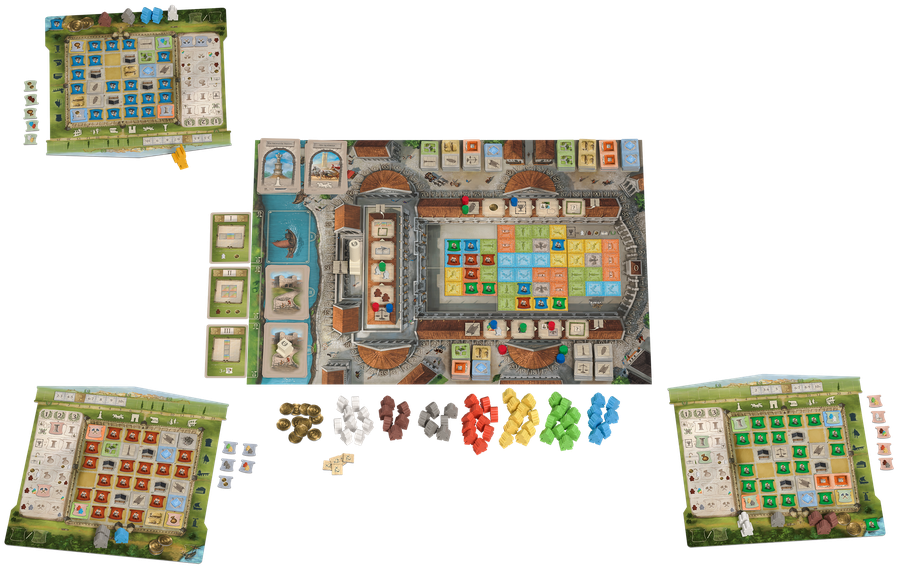 Phew, that's it for setup. Time to start playing! Each round has two main stages. In the first stage two street cards are revealed. These indicate a specific row or column in the Colonia. Players now select a tile from each street, select one to keep and pass the other to the right. The two tiles are placed face down on the dedicated Colonia area. You are now ready for stage two. Beginning with the starting player, the active player reveals his tiles. He chooses one tile and receives the indicated resource. This can be coins, builders, workers, assistants, tribunes, upgrades (for the slider, remember?) and citizens. A citizen tile is placed immediately on a corresponding empty slot, remaining tiles (used or unused) are discarded, but tiles of your color always end up as envoys in the port.
At this stage you may now decide to construct a building on an empty area of the Colonia. You can choose between gray buildings, which are paid with builders, or colored buildings, which are paid with colored workers. If you miss a certain color, you can use an assistant to change the color of a worker; for grey buildings you are allowed to substitute two workers of the same color for a builder. Each building type has a specific bonus: grey buildings allow you to advance on the corresponding forum track; colored buildings allow you to send one or two envoys to the forum. There they are placed on the mosaic section corresponding with the building color. However, if a section is already occupied, you are obliged to add to that section. If you manage to complete a section, you are entitled to a bonus. Note also that each mosaic contains an eagle space. Putting an envoy on or next to this space will score you points.
As for the tribunes, they can be used in two ways: they enable you to pick a tile from any area, regardless of the street card, or you can use them to collect resources from both Colonia tiles.
Once you completed your turn, the next player is up. At the end of the round, the starting player token moves to the right, not to the left.

When a street pile is exhausted, an intermediate (or final if it was the last) scoring takes place. However, before this happens you must pay your citizens: one coin for each row with at least one citizen. If you fail to do so, that citizen becomes inactive and you lose its benefits. Fortunately it can be reactivated at the next scoring, provided you have the money. The scoring considers several aspects. First your Colonia is scored. You score colored buildings if the corresponding crane is revealed. Then you score grey buildings: the number of different types in a row, multiplied by the presence of citizens in that row. Next the forum is up. Here you score for envoys adjacent to an eagle space, and for the largest connected area of your envoys. Note that score for the latter depends on the position of your slide bar. And finally, the Trajan card is scored. This relates to a certain building pattern in your Colonia, and possession of specific resources.
The player with the highest score after the last phase gains the approvement of Trajanus and may dine at his side. 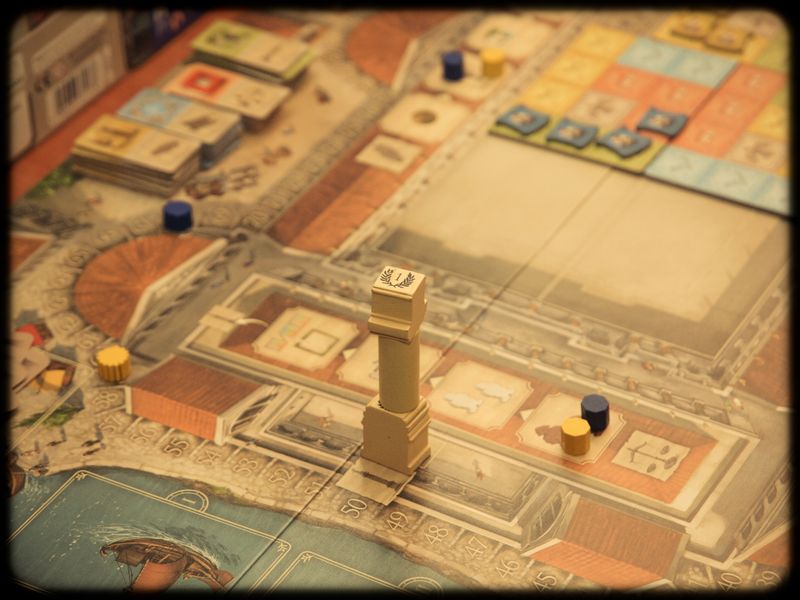 Forum Trajanum is a nicely presented game with beautiful components. The column of Trajanus is a remarkable highlight, just don't bump against the table or it might fall over. I think it's a pity that it's only used as decoration and score indicator; I have the feeling it had greater potential. The game mechanism seems complex at first, but after one or two rounds you'll get the hang of it. Getting to know the symbols is also important, but the player aids offer sufficient info. Tactically, it's difficult to plan ahead because you never know which tiles you'll get in the next round. In that respect, it's more a game of opportunity. The dilemma already starts with choosing tiles: which resource do I need most? Can I pass that other resource to my right or does that provide too much advantage? Same for building: you can play economic and just build with what you got, or you can save up hoping to get the right tiles later to construct that one building that will score all over the place. Also, timing of your actions is important with regard to the scoring phases.
Interaction is present, but limited. There is of course the resource exchange, but the main conflicts occur at the forum where you'll fight for position next to the eagle squares, for being first to complete a color section, and for filling up the greatest area (and preventing it for yoor opponents).

Rounding up you can say that Forum Trajanum is basically a tile placing game, but one with a lot of meat to it. There's a bit of luck involved and the interaction is limited, but if you don't mind this, you won't regret playing it.

This game was donated by Stronghold Games and can be played at Het Geel Pionneke from november on.