"Kraftwagen" is a game for 2 – 4 players situated in the early decades of the 20th century, when the automobile started becoming a commodity and conquered the newly paved roads, marking a new era in transportation. Each player is CEO of a car manufacturing company, competing for supremacy on the emerging market. You will perform research to advance the technology level of your assembly line, hire famous engineers to get an edge on your opponents, produce quality cars to satisfy the various tastes of the customers and take part in Grand Prix races to obtain prestige and prove your superiority. Each of these activities will earn you money, and the player who collects the biggest cash reserve over three rounds may crown himself as "king of the Kraftwagen".

A player starts with a player mat containing 5 spaces. Three of them are workshops where either a car engine or a car body can be produced, the two (simplified) components that make up a car model. These components can have a quality level from 1 to 7, depending on your current research points in that area (you start at 1). There is also a cantina where your workers relax before they are committed to a task. And finally there is the Grand Prix car box of the car that will participate in races. Here you can upgrade the racing engine to make your car move faster.

The game board has 3 main areas, with 2 extra areas to place general resources (award tokens and research cards). Other resources like engine tokens, car body cards, excess workers and money chips are placed next to the board.

The top left part is the Grand Prix racing track, where your race cars compete. Each round a new race is held for a total of 3 races. At the end of a round points (i.e. money) are awarded according to position and the number of laps. Cars are moved as an action, and advance a number of spaces corresponding to the current engine level. Note that only empty spaces are counted, so if two cars are directly in front of you you advance 2 spaces extra.

The bottom part indicates the market. There are 4 buyer profiles to satisfy (2 customers per profile): buyers preferring the best engine, those preferring the best car body, buyers aiming for the cheapest price and finally those preferring the best service. Players can try to win a customer by offering a car model for sale at the end of their turn. Such a model consists of a car body and engine, assembled from parts in the worlshop and also includes a number of service mechanics from the pool in the cantina. Finally a price tag is added, freely chosen from prices available for that round. Depending on the combination this allows you to target a specific customer profile.
However, a sale is not immediate! All sales are performed at the end of a round, and since only 4 customers are admitted for max 6 car models it is clear that not all models will get sold: a player can influence the demand (invite a specific customer as action) or provide a better package deal for a profile (lower price is preferred when stats are equal).

The third main part of the game board is where the action mechanism unfolds. It consists of a square where action tokens are distributed sequentially along its edge, with some empty space between the head and the tail. Each player has one worker token here chasing the action chain, so it's not really a worker placement game. The concept is similar to e.g. Tokaido where the last player in the chain can choose any action in front of him. The player executes the action, replaces the action token with his player token and puts the action token at the front of the chain. Whomever is now last takes the next turn. Actions that get left behind (not chosen by any player) move automatically to the front. So all actions will always be available, but not necessarily in a convenient location.
There are 10 action tokens to choose from, most with 1 action, some with 2 actions and a single with 3 actions. 6 basic actions are possible: hire an extra worker, assemble a car body, assemble an engine, move your race car, invite a buyer and perform research. Most actions will be clear by now, only the research needs some clarification. When this action is chosen, the player can pick one of two research cards that are open in the research area of the board. There are 3 types of research cards: immediate actions (e.g. get workers, get a part, go race,...), development actions to improve your quality level (requiring a worker to activate) and engineers. These engineers offer special benefits that may come in handy during the rest of the game.

Game play is therefore not very complicated. The last player in the chain chooses and executes an action, decides if he wants to offer a car model for sale and ends his turn. Then it's the next player's turn. With the applied concept it's even possible that the same player gets to play two turns in a row.
A round ends when either 6 cars are available in the market or when the invited customers get impatient for their cars. First the Grand Prix is evaluated and then the cars are sold in order of customer invitation. Now a new round can begin, and after 3 rounds the game ends. All money chips are added up and the player with the most money wins.

Note that money can be earned in various ways. Not only in the scoring after each round, but also during the game by getting awards for being the first to realize specific achievements (e.g. hire 3 engineers, build a car body of quality 3, having all workers in play etc).

I must admit that I've played the game only once, but it won't be the last time. 'Kraftwagen' is a smooth game with a different mechanism that is executed very well. There are three main ways to score, but the market should be the main focus. If you're able to sell multiple cars per round you've taken a giant step to victory. But don't neglect the awards or the Grand Prix, because this may be decisive at the end. There is some room for tactical manoeuvres (manipulating the buyers, going cheaper to steal a sale), but it's no too deep to cause analysis paralysis.
'Kraftwagen' is not a filler and it's not a heavy weight. With its announced duration of 70 minutes (experienced players will clock in a lot faster) it's ideal as warm up for a game evening. It's not complicated and easy to explain so it should appeal to all audiences. I'm sure you will enjoy it. 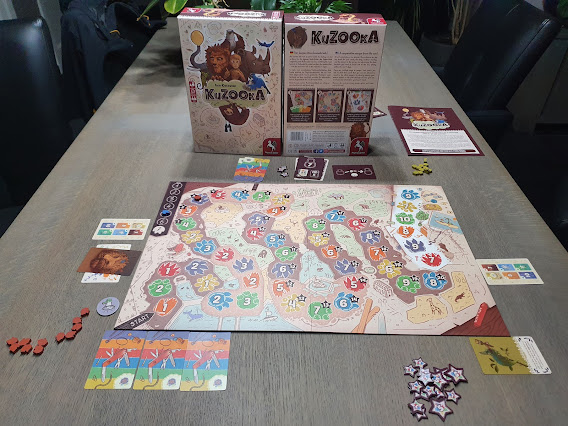