The orchards of Andalusia are the setting of the new dlp-game “Citrus", which will be presented during this year's Spiel ‘13 fair in Essen. Jeffrey D. Allers has created this clever design, which provides fun for ambitious players. Illustrations were made again by Klemens Franz.
There is a very special rhythm that makes Citrus unique. As a player in the game, you will always want to build plantations, but you must also harvest them periodically to earn money for further building. Harvesting, however, also means abandoning your claim to those plantations.
What is the right time to collect income? Since income depends on the number of regions you own, more regions means that you will get less money. But holding onto more regions also increases the potential for victory points!
Moves in Citrus are simple, but decisions are tricky. The small but tense dilemmas give the game it’s high fun factor. Purchasing new plantations offers many choices, but when you buy the tiles you want, you must also usually take some you don't need. And after buying, you then need to decide where to place the plantations most effectively. Will you expand a region and adjoin to another Finca, or will you place it on a Landscape tile, which provides you with a number of special options?
Jeffrey Allers has put a number of new mechanisms in the game, which continues in the tradition of the dlp line: a manageable playing time, attractive components, challenging but overwhelming game play and, as all dlp-games, first-class competition for two players.
The rule are well layed-out and clearly explained. They also feature several variants, including a family version and a shorter game using the reverse side of the double-sided game board.
„Citrus“ by Jeffrey D. Allers will be released in October from publisher dlp games. 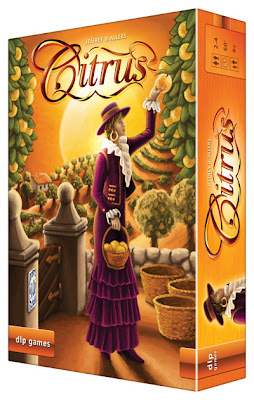 www.dlp-games.de
booth: 1-C114
Notice: Jeffrey D. Allers will reveal the development of Citrus in the column „Designers Diary“ at Boardgamegeek.com in the coming weeks.
For inquiries and further information contact us under info@dlp-games.de
English and German rules can be downloaded from our website under http://www.dlp-games.de/content/download/